Sterile compounding pharmacy cleanroom apparel is widely used in sterile compounding pharmacy facilities. USP 797 compliance and the USP 800 compliance requirements give direction on apparel for cleanroom workers a compounding pharmacy. With the primary focus being maximum coverage of clothing, hair, skin, and nails, Cleanroom Connection recommends that pharmacies use a one-piece cleanroom coverall with attached hood and boots, often referred to as a bunny suit. This style of pharmacy cleanroom apparel simplifies the gowning procedure while at the same time eliminates the possibility of skin exposure at the neck and ankles. Often times, pharmacists and workers wear a separate coverall, hood, and shoe cover which potentially can expose skin when they stretch or lean if the apparel fit is not correct. Because the goal is to prevent particles from entering the pharmacy clean room, the disposable apparel should be non-shedding. 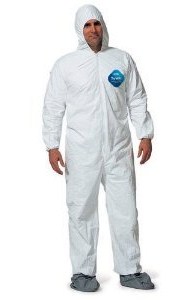 Cleanroom Connection supplies over 500 independent sterile compounding pharmacy cleanrooms as well as hospital-based compounding pharmacies. Based on customer feedback, FDA inspections, and other regulatory testing including particle testing, polypropylene is not recommended. Although polypropylene is classified as non-shedding, it tears very easily, releasing particles. Because it is also the cheapest of the non-shedding pharmacy cleanroom materials, it is often chosen due to the promise of cost savings. This cost-cutting decision often backfires due to cleanliness issues that affect product quality and worker safety. Cleanroom Connection often receives complaints from pharmacists and workers about the blue polypropylene shoe covers, which are made from the same weak material.

Proper selection of non-sterile or sterile compounding pharmacy material is based on the level of cleanliness required for the controlled environment.

All cleanroom clothing that is allowed to be worn in an ISO5 Class 100 facility will be clearly labeled on the packaging or on the data sheets specifying Class 100 ISO5 compatible.

Cleanroom Connection works alongside PCAB, IACP, USP and top pharmacy consulting firms in being educated about what cleanroom apparel is expected to be worn in sterile compounding pharmacies. Often times the incorrect cleanroom suits are offered to pharmacies by suppliers that have little knowledge about working in a clean room or pharmacy.

Sterilization Methods for Cleanrooms and Their Supplies
March 3, 2021