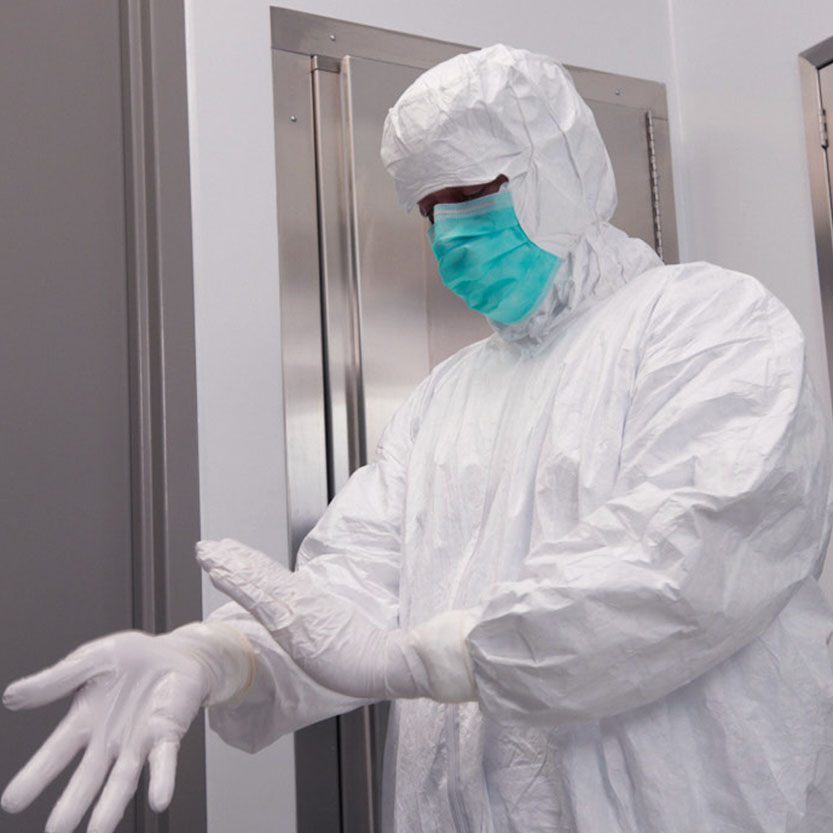 Wearing the wrong type of personal protective apparel is very damaging to particle counts and other types of contamination in a critical environment. Cleanroom apparel is designed to keep contaminating particles inside the cleanroom suit, masks, bouffant caps, gloves, etc. while being breathable so the workers are comfortable. Often, when particles are detected inside a cleanroom’s air or on its surfaces, it is assumed to be mistakes made by the workers. The truth is that particles such as dust, lint, skin cells, and microbes can be permeating through the cleanoom suit material escaping into the critical environment.

Surveys shows that gowning up to work in a cleanroom is confusing, and gowning in coveralls is the most complicated. It also has been shown that cleanroom workers are often unsure about sterility of their coveralls due to the packaging. Other studies show that half of cleanroom operators report their coveralls fit poorly. These are major concerns as improper fit and not following gowning protocol further increase chances of particles escaping through apparel into the environment. Humans shed 40,000 skin cells per minute and 5 million particles greater than 3 microns when moving. It has been shown we generate 100,000 particles greater than 3 microns even when standing stationary. 50% of contamination alerts and actions in cleanroom across industries are people-related with an average of 18 contamination events per year due to personnel gowning issues.

How Do Disposable and Laundered Reusable Garments Differ?

Disposable cleanroom garments are manufactured in a variety of materials, however the common thread between them all is the tortuous pathways created in the non-woven materials. The construction of non-woven materials such as Tyvek, MP-coated polyetheylene. and SMS ensure that even submicron-sized particles cannot escape from inside the apparel and into the clean environment. Laundered, reusable garments typically contain a single layer of woven polyester blend fabric, which, coupled with the weave, may allow particles to pass through. The fabric also degrades after multiple laundering and sterilization cycles – compromising the barrier built into the garment material.

Kimberly-Clark, a leading manufacturer of cleanroom apparel conducted testing on laundered reusable garments and found that the Bacterial Filtration Efficiency (BFE) declines more than 25% after an average of five washings. That is the equivalent of 1 out of 4 workers not wearing sterile garments at all. What is the useful life of these garments and when should they be retired? The answers vary – from 100 times, according to the material manufacturer, to 19, according to one pharmaceutical company. Here is what the Kimberly Clark study found :

Disposable single-use sterile cleanroom garments have many benefits over launderable reusable apparel. The garments are washed once to guarantee optimal, predictable performance. The non-woven materials have 95% BFE. Disposable cleanroom apparel is breathable, especially SMS garment.s Unlike reusable garments, single-use sterile apparel is folded in a specific way to guide the wearer in proper aseptic donning lowering the contamination risk. Most single use sterile clean room apparel is also fully recyclable.

Read more about the Kimberly Clark study below.

Benefits to Growing Cannabis in a Cleanroom Environment
March 25, 2020