Sterile Clothing and Garments For Cleanroom Use 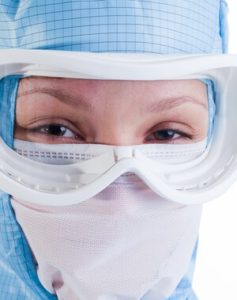 Sterile clothing and cleanroom garments are becoming a requirement in many different industries. Aseptic critical environments and clean rooms are increasing in popularity especially in pharmaceutical compounding and medical device manufacturing. Cleanroom Connection is the leading source for all styles of sterile clothing for all industries that utilize clean rooms. Sterilized garments are individually packaged and come with a certificate of sterility to be kept on file in your cleanroom. Most medical, pharmaceutical, and related industries have requirements to perform work in sterile critical environments.

As we consult with clean rooms for sterile clothing and aseptic cleanroom garments, Cleanroom Connection account managers often find that many cleanroom workers are not aware of the difference between cleanroom apparel that is simply sterile and “clean and sterile” garments.

The point of working in a clean room is to not only maintain sterility, but also to minimize any foreign particles from being present, it’s vital that to only wear sterile clothing that is labeled as “clean and sterile”, not simply sterile. To comply with USP 797 guidelines for preparation of sterile pharmaceutical products, a cleanroom must meet at least the ISO8 standard, the gowning room, ISO7, and the immediate sterile preparation area or laminar flow hood area must meet ISO5 for particulates.

Cleanroom apparel that is only sterile, but not clean-processed or sometimes referred to as “lint-free”, will introduce particles into your clean room, albeit sterile particles. Many sterile cleanrooms today are encountering particle issues and are confused as to how this is happening. Workers are wearing all sterile apparel and using sterile cleanroom cleaning supplies. But, the issue is they are not using “clean and sterile” cleanroom products.

Proper sterile clothing and garment for cleanroom use will be specifically labeled as “clean and sterile” and will not introduce foreign particles into your critical environment when donned properly. Sterile clothing or sterile gloves that are not “clean” or lint-free are not appropriate in a clean room. They are for use in situation such as when a nurse is working with a patient in a clinic or hospital.

Now that you understand the difference between sterile clothing and “clean and sterile” clothing, the next step is choosing the right products that meet the class of your cleanroom. Depending on your application, you will be working in a certain cleanroom class or cleanliness level. As mentioned above, USP 797 requires a cleanroom class of ISO5 Class 100 and this is a very common class of critical environment not only for sterile compounding pharmacies, but also medical device manufacturing and other critical applications.

Sterile cleanroom apparel consists of a full body suit including booties along with sterile gloves and hoods, leaving no exposed skin. Less strict, more industrial clean rooms like bearing manufacturing or assembly clean rooms for less sensitive technologies often use ISO6-8 Class 1000 – 10,000 clean rooms. These are often non-sterile and require only a lab coat, shoe covers, and other basic cleanroom apparel to cover the major exposed areas of the body like your torso and shoes.

Benefits to Growing Cannabis in a Cleanroom Environment
March 25, 2020

How To Choose The Best Cleanroom Supplier
July 5, 2019